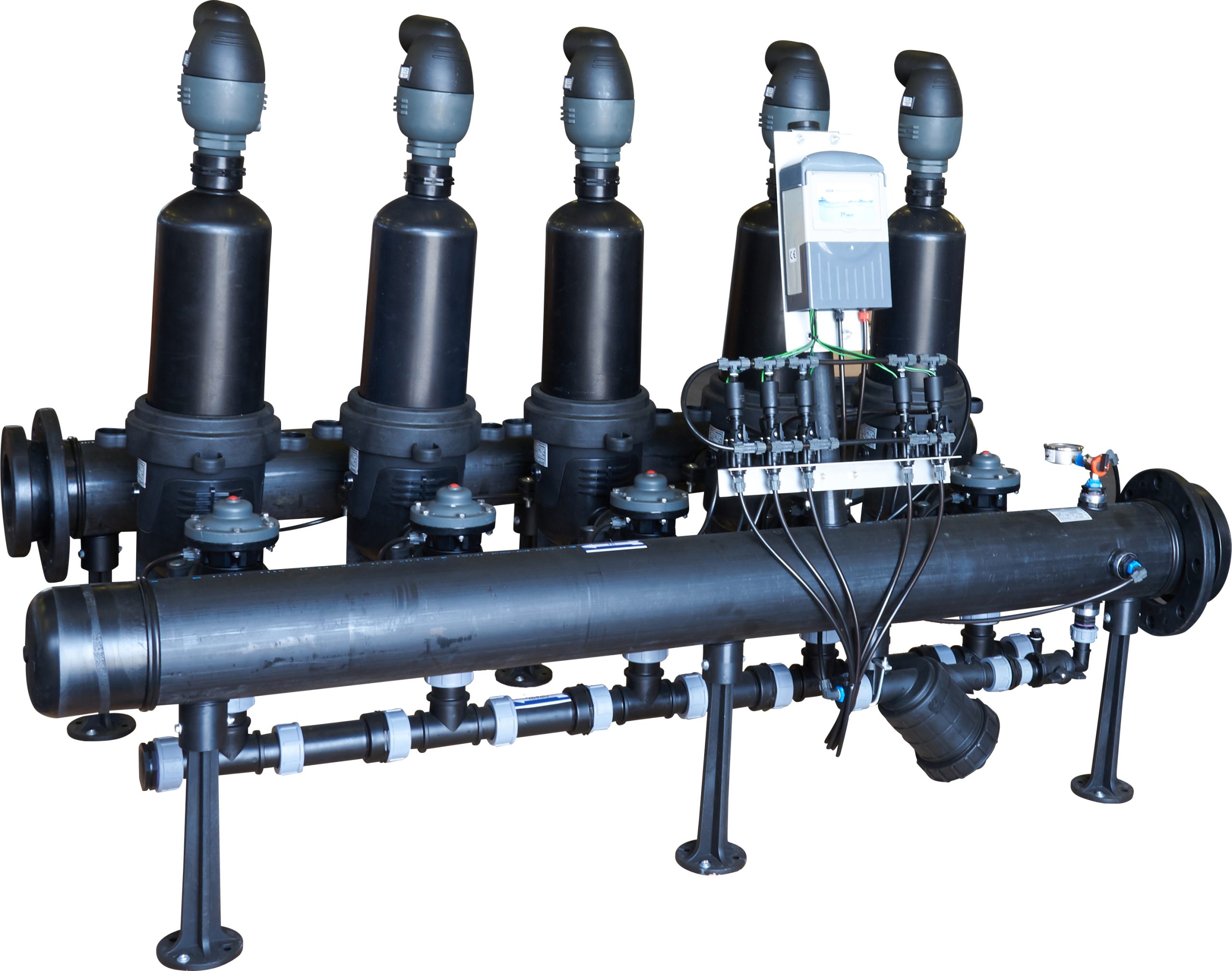 Recently we have improved a large soft fruit grower secondary filtration, by using 11 TVD automatic disc filters by Tavlit. HAving the units on-site will reduce water wastage by low flushing flow required by these units.

And make sure that in field irrigation is safe from any biofilm or build-up of algae from the main pipes.

Please get in touch if you require further technical info or advice .

TAVLIT line of automatic disc filters model TVD combines high-quality depth filtration with efficient flushing of the disc element. This unique automatic disc filter (patented), enables flushing at a very low pressure of 1.5 bar as compared to 3 bars normally required by such systems. The innovative technology of the filter uses venturi devices inserted at the spine´s inlets that introduce air during the flushing process to enhance it. the mixture of air and water enables more efficient flushing, uses smaller quantities of water for flushing, and shortens the flushing time. It also enables proper flushing at low pressure. The use of air also cushions the discs thereby reducing friction and prolonging the disc element life. The venturi devices insert air from the atmosphere and no external power or compressed air is required. The venturi devices are open only during flushing and do not operate during filtration. The filter element is composed of highly accurate grooved discs from excellent quality plastic materials. The grooved discs are compressed together to form the filtration element. The intersections between the grooves and the outer surface of the element offer large effective filtration surface with in depth area used to stop debris is especially effective in filtration of organic matter.

They specialize in controller technology for optimization of crop growth and product efficiency, and deliver complete and configurable solutions for horticultural applications, such as electronic and mechanical climate control, irrigation and fertilizer mixing, and horticulture LED grow lights. We also offer full line solutions built from our wide and deep product range.

Our product range provides 360° management of your installation – from complete climate control solutions and flexible fertilizer mixing systems to management software and powerful LED fixtures delivered as single product solutions or full line solutions. We have an outside-in perspective: we develop products with customers for customers.

Reliability, user-friendliness and the possibility of combining and configuring our systems and products keep us at the forefront of the horticultural industry. Our controls are all tested on-site at commercial greenhouses during development.

Put simply, we develop state-of-the-art products with long life spans that improve your return on investment.

Our products allow you to create healthier crops under full control – even where climate traditionally would be a challenge for production. We focus on developing products that enable sustainable production for all our customers.

Founded under the name DGT (Danish Greenhouse Technology) in 1956, we bring more than 65 years’ experience to the table. In 2004, DGT was acquired by Micro Matic and placed under Senmatic and in that connection renamed to Senmatic. As of today, the two names have been combined and we are now known as DGT by Senmatic.

Who will you meet at DGT by Senmatic?

We highly value personal corporation with all customers, small or large. Working closely with our customers is the key to our success, and why we are one of the leading global suppliers of horticultural controls and equipment. It is also why our sales team consists of horticultural growers and technicians: they truly know their way around a greenhouse and with their extensive hands-on experience they can guide you to solutions that match your exact needs.

With distributors in more than 20 countries, we support customers on most continents. Most of our distributors have cooperated with us for many years. They are all very technical skilled and highly qualified in supporting you in our product range and how to ensure you the best solution.

Man’s primary need has always been to drink, feed and have enough water to improve the quality of life, up to having direct access to it in his home.
A journey started by man thousands years ago …. and undertaken by us since over 40 years, to offer an increasingly complete range of items.
All for applications in agricultural and residential irrigation, greenhouse and open field crops, wells, civil and industrial construction, mines and firefighting, water treatment, air conditioning, swimming pools.
Wherever there is water Quapus sa srl is able to offer reliable, innovative, flexible and economic plant solutions.

Applications with temperatures from -10 ° C to + 60 ° C to use the products of the Supreme fittings range in any part of the globe. This also where logistics and infrastructure are not available and operators have limited experience. When using for urban water networks, it is important to be able to distribute H20 in buildings with reliable, easy-to-use and maintenance and above all economic systems.

From the analysis of these needs the various product families were born, part of the Quapus SA srl by Supreme fittings offer. Today we have come this far, tomorrow is to be built by working together with our customers, installers, distributors, builders, public and government bodies, engineering and design companies. Thank you for sharing your needs, ideas, proposals with us.

Their satisfaction will be the basis for our / your future growth.

Let’s work together to build a better tomorrow

WHO WE ARE TODAY

The Quapus by Supreme fittings team

Fruit Focus 2021, was good to be back on Trade shows, meeting again familiar faces. #fruitfocus2021@PennyIrrigation

Fruit Focus has returned on 21 July 2021 at NIAB EMR. Usually attracts an increasing number of visitors year on year! It brings together growers and industry professionals, giving them a unique opportunity to network with leading exhibitors, that are looking to share recent developments, technologies and products. It showcases all aspects of agronomy, machinery, equipment, business information, pre & post-harvest technology and marketing.

Fruit Focus is the key event for the fruit industry and gives industry professionals a chance to see a good range of exhibitors from all areas of the industry which includes; soft fruit, top fruit, orchard fruit, as well as vines.

Finally, after a year of uncertainties and lockdown periods, we were back at a Fruit Focus. Showcasing our Jhuette complete Turnkey projects, DGT by Senmatic automatization products, filtration by Tavlit.

We had inquiries during the hot day, regards structures, automatization and filtration. But it wasn’t as in the past people are still a bit reluctant to go out and mingle in large crowds.

We look forward to next year’s show when we will have even more people visiting , as the Covid will be long gone. 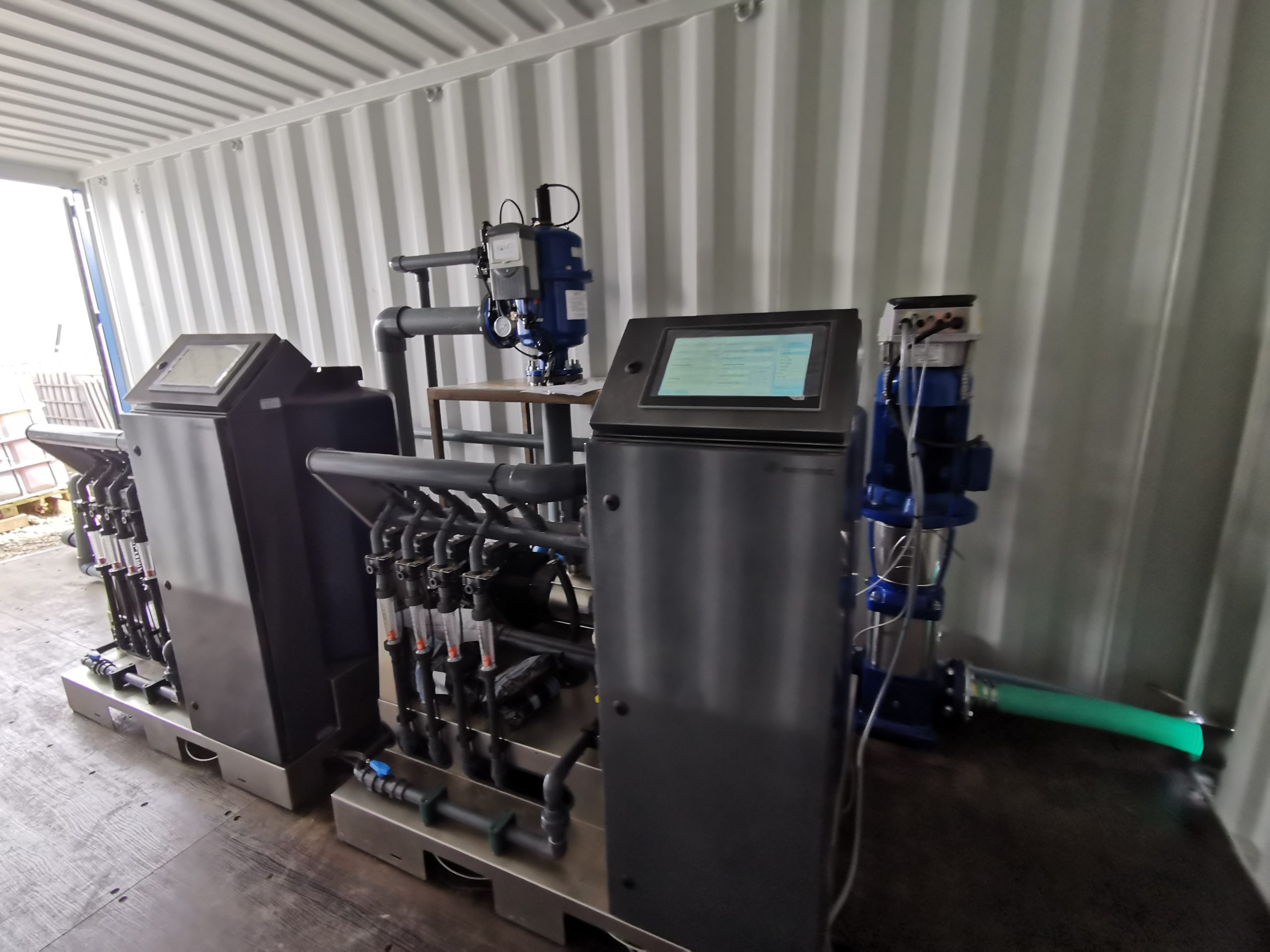 The capabilities are more available at this unit than the other ones.

It has a new generation decoder system that can be added in future to control the valves and get back info from field sensors as temperature, humidity, radiation, leaf temperature, ec out, drainage . We call it Siip system.

• Save water and fertilizer by timely irrigation

• Save labour due to the automated irrigation system

Grow feed systems have to be forward facing as well as super accurate and we believe that the Senmatic is the only system than can be relied on to do this.

When DanRoses took ownership of an older nursery on the Danish island Funen four years ago, seven fertilizer mixers from the 1980’s controlled all watering in the production, but the process was always monitored by the grower due to instability and errors. Now, fewer new mixers give better results – and peace of mind.

Since the 1980’s, seven AMI 900s and AMI 90s watered the 25,000 m2 indoor rose production at the Danish nursery DanRoses. But in later years, the grower began overseeing every single watering during daytime manually – simply because he was unsure of the old mixers’ ability to perform and whether the valves would open as intended.

“Some mornings we discovered that the planned watering at night hadn’t even started and we knew that we would not be able to catch up with watering before having to pack roses in our packing department. As a result, we would take a loss,” says Lars Olsen, who is responsible for the daily management, production, and sales at DanRoses.

Now, the seven old mixers have been replaced with three new AMI Penta from Senmatic, and the system needs no human control. “We now know that irrigation is carried out as planned with the correct dosage of fertilizer. I drive to work in the mornings with far more peace of mind and we experience less loss in our production,” says Lars Olsen, production and sales manager.

Watering reduced from 12 hours to just 2,5 hours daily
The old mixers had active watering activities for 12 hours every single day. One pump could control only one watering valve at a time and it took 40 minutes to water per valve.

With the AMI Pentas, active watering activities have been reduced to just 2,5 hours daily, irrigating through three valves simultaneously – in just 20 minutes. “We used to spend hours upon hours on watering. The old pumps were instable, we had no security when it came to fertilizer dosage and had to control the process manually. That time is now free for other tasks – and we even save fertilizer, because of the high accuracy of dosage. It’s much more effective,” says Lars.

AMI Penta can control up to 100 groups with individual start conditions. For each group, you can choose between 20 different recipes with information about EC, pH, and the fertilizer mix. Each group can control up to 30 valves, and these can be chosen freely between the 200 valves available today in the mixer. Up to 9 valves can irrigate at the same time which gives a maximal utilization of the capacity. Irrigation time and volume can be set individually for each valve.

Learn how to install an HPGen A series system in a simple and professional way. HPGen generates Peroxide UltraPure in an autonomous, safe and sustainable manner for use in agriculture, livestock and water treatment.. For more information, please contact us . 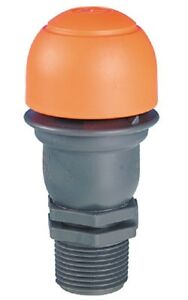 High velocity air will not blow the float shut. Water entry will lift the float which seals the valve.

The smooth discharge of air reduces pressure surges and other destructive phenomena.

At any time during system operation, should internal pressure of the system fall below atmospheric pressure, air will enter the system.

by water column separation. Air entry is essential to efficiently drain the system.

As the system starts to fill, the valve functions according to the following stages:

The float will immediately drop down, opening the air & vacuum orifice.

Air will enter the system.